Some Mathematics in Park

During morning walk, I saw a bench on the right side of the path, something like below image. 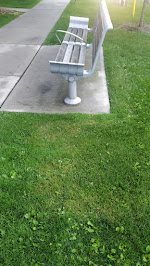 As I walked further, I found another bench but on the left side of the path. Something like below image.

I found that these benches were placed at some regular intervals. There were few places on the path with benches on left side and right side both. I found this quite interesting and useful. Persons walking on the path get place to sit and relax at some intervals with views of right side or left side. Whereas, there are places where people can sit in front of each other and relax.

There can be several interesting questions in this scenario. You have been sitting with your friends on benches which are in front of each other at some place on the path. You all decide to restart your walk. After what distance you would get benches facing each other again? That means, what is the minimum distance you should walk in any one direction to get benches on both sides of the path once again? Let us get it intuitively.

We got common multiples of 140 and 200 quite easily. So, we got a place where benches are on both sides of the path. We can sit on them with friends and talk. It may not be that easy always. So, what could be the worst situation?

You can try identifying such values of distances between two consecutive benches for right side and left side respectively such that you don't get benches on both sides of the path at the same place in next 5 kilometers. You have to work on lowest common multiple for this.

Try experimenting with distance between two consecutive benches on either sides of the path to design a suitable sitting arrangement for elderly people walking on that path. Make necessary assumptions.

Translate in your preferred language